The aim of this study was to record mandibular kinematics in patients after total TMJ endoprosthesis using a magnetic sensory system.

The movement of the mandibular was examined in 10 patients who underwent TMJ reconstruction using total endoprostheses. The condylar range of motion, the angle of the transversal condylar inclination (TCI), the speed of joint movement (max S) and the stability distance between the position at the beginning of movement and at the end (Start/end) of TMJ prostheses and native joints were measured 1 week before surgery (T0) and 12 months after (T1).

In the present study, in all cases, a slight but clearly defined translational shift on the side of the intervention was detected on the control condylograms, which can be referred to as «pseudotranslation».

Reconstruction of the temporomandibular joints (TMJ) using total endoprostheses is recognized as a safe, effective and reliable method of treatment in patients with articular ankylosis, tumors of various etiologies, degenerative diseases at late stages, loss of vertical height of the mandible due to resorption of the condylar processes [1-5]. One of the main goals of alloplastic total reconstruction of the TMJ is to restore the function of the maxillary system, including chewing, breathing, swallowing, and speech [6]. It is generally believed that TMJ endoprostheses are unable to reproduce translational movements and are limited exclusively to rotation, which is presumably due to the excision of the attachment of the lateral wing muscle to the mandible, the presence of scar tissue and fibrous encapsulation of the prosthesis head in the postoperative period, as well as the construction of the endoprosthesis [7]. In the case of unilateral arthroplasty, the absence of translational motion of the prosthesis has a pronounced negative impact on the contralateral joint, leading to a significant change in its movement trajectory and, as a consequence, potential pathological load associated with dysfunction and condylar resorption [8, 9]. The issue of complete restoration of mandibular movements in patients after TMJ reconstruction with the use of total endoprostheses remains unresolved [10, 11].

Most of the literature on TMJ reconstruction did not analyze mandibular function as a biomechanical parameter. Studies were limited to measuring the intercuspidal distance during mouth opening and assessing quality of life using a visual analogue scale (VAS) without a deeper understanding of condylar kinematics [5, 11, 12].

The aim of the study was to record the kinematics of the mandible in patients after total TMJ arthroplasty using the system.

In July 2020. Ten patients underwent reconstruction of the TMJ using total endoprostheses due to ankylosing conditions. All patients were fitted with individual two-component TMJ endoprostheses with a titanium implant of the condylar process and a surgical component of the temporal fossa (manufacturer: Konmet LLC, Russia; CONMET LLC, Russia) by one surgical team.

The kinematics of the TMJ prostheses and native joints were measured 1 week before surgery (T0) and 12 months after surgery (T1) using the CADIAX Diagnostic magnetic sensor system (Gamma, Austria). This system registers and displays the movement of the mandible around the articular axis with an accuracy of 0.01 mm and is considered a reliable system for reproducing condylar kinematics. The process of motion registration in the TMJ was performed according to a standardized protocol: I. Fixation of the paraocclusion fork on the teeth of the mandible; II. Installation of upper and lower facial arches on the patient's head; III. Attachment of flags and scribes to the facial arches; IV. Movement registration (Fig. 1) [13]. 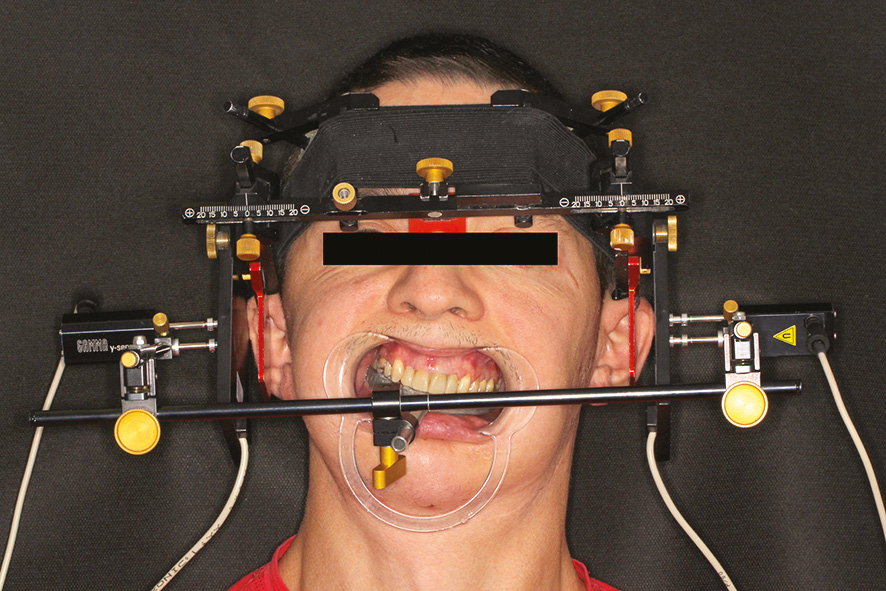 Fig. 1. Fixation of the magnet sensory system on patient for the registration of the kinematics of TMJ endoprosthesis and native TMJ.

The first step in the application of the magneto-sensor system is the calculation of the dynamic articular axis, which is determined by the program by calculating the geometric curves formed by the displacement of the scribes at the moment of the mandible making only rotational movements, while the operator excludes any translational ones. To convert the recorded values into the coordinate system of the articular-orbital plane, the geometric data of the maxillary facial arch were entered into the program.

During the study, each patient performed three cycles with maximal mouth opening, pro- and laterotrusive movements of the mandible. Based on these parameters, the condylar range of motion (CRM), transversal joint path angle (TCI), joint velocity (max S), and distance of stability between the position at the beginning of the movement and the end (Start/End) were measured.

When measuring CRM, we evaluated the linear distance (LD) passed by the condyle from the position of the mandible in the habitual occlusion before the mouth opening with the maximum intercuspidal distance, using the X, Y, Z coordinate system oriented according to the sagittal plane (X and Z) and axial (X and Y).

The transversal articular path angle (TCI) was measured at 5 mm of travel from the point of the articular axis during opening/closing of the mouth, protrusion/retrusion, and mediotrusion on the right and left.

The joint velocity (max S) shows the movement of the articular axis of rotation of the condyles. Comparison of the velocity in both joints reveals dynamic asymmetries. The study of changes in the velocity of movement of the articular axis during different movements of the lower jaw, characterizes the quality of work of the masticatory muscles in the performance of the corresponding movements.

Statistical analysis. Analysis of preoperative and postoperative parameters was performed using analysis of variance. The mean (M) and standard deviation (sd) of each index were calculated. Student's paired t-test was used to compare the results before and after surgery. In the case of small effect sizes, the level of significance was checked using Wilcoxon's criterion for linked samples. The following confidence levels were accepted: * — p<0.05 (reliability >95%); ** — p<0.01; *** — p<0.005; NS — not significant difference (p>0.05).

Table 1. Amplitude of the condylar movements in X, Y and Z planes, mm

Analysis of the kinematics of the TMJ prostheses and native joints revealed that the function of the reconstructed joints was only partially restored. Compared with the native condylar joints, the condylar joints restored with total endoprostheses were characterized by a significant decrease in translational movements. This may be partly due to the loss of attachment of the fibers of the lateral wing muscle, as well as to the design feature of the endoprosthesis, which has no space for translational shear [7, 9, 14]. The fossa component of the temporal bone has an anterior stopper that minimizes the possibility of dislocation of the endoprosthesis at the moment of maximal opening of the mouth [15].

In the present study, the absence of a statistically significant difference between the LD CRM and TCI in total arthroplasties relative to the pathological joint indicates the presence of pseudotranslation of the reconstructed joints. This phenomenon was noted in his study by P. Quinn [15], justifying this phenomenon by a shift in the positioning of the rotation point of the endoprosthesis below the rotation point of the contralateral joint. It is also worth noting that the translational movements of the mandible are performed not only by the contraction of the lateral pterygoid muscle, but also by the medial pterygoid, masseter, sublingual and supragingival muscles. Accordingly, patients who have undergone TMJ reconstruction can restore some of the translational movements by engaging this muscle group [10]. In addition to the active forces created by muscle contraction, TCI is also influenced by the max S of MO movement [14, 16]. Max S is related to the nerve impulse conduction velocity in sensory axons and motor fibers of peripheral nerves. When comparing max S movement of the TMJ of young and elderly people, it was found that max S in elderly people is significantly reduced (89 mm/s versus 127 mm/s, respectively), leading to changes in chewing, occlusion, and limitation of condyle movement [17]. Accordingly, an increase in max S in T1 of our study may also contribute to pseudotranslocation of the mandible on the endoprosthetic side. A decrease in the Start/End indices indicates the stability of the condyle position after condylar movement.

When assessing the kinematics of the mandible in patients who underwent reconstruction of the temporomandibular joint using total endoprostheses, in all cases we found a slight but clearly detectable translational shift on the intervention side, which can be labeled as "pseudotranslation" on control condylograms (Fig. 2). This finding contradicts the generally accepted view of endoprosthesis mechanics, but is consistent with the hypothesis of the possibility of mandibular translation involving a muscle group other than the lateral wing muscles. Considering that during mouth opening, the native mandible first rotates around its articular axis and then translates anteriorly [18, 19], it is logical to assume that in patients who have undergone temporomandibular joint reconstruction, almost the entire amount of translation is taken by the joint on the conditionally healthy, nonoperated side, thus being overloaded. In theory, the pseudotranslation value on the prosthetic side should be inversely correlated with the shear amplitude on the healthy side. If the observations in this study are confirmed by clinical and radiological data, a correlation between the pseudotranslation magnitude and the severity of changes in the contralateral joint can support modifications in the design of endoprostheses.

The diagram on the left represents Bennett movement in the total right TMJ endoprosthesis (X axis is horizontal, Y axis is vertical). The lower graph shows sagittal plane divided by points in 1 mm sections (X axis is horizontal, Z axis is vertical). Upper sections of both coordinate systems are oriented medially. Sagittal coordinate systems are oriented forward and directed towards the center of the screen. The movements are marked with red lines.

The authors declare no conflict of interests.