The article presents a clinical example of the removal of myxoma in a 14-month-old child with half resection of the mandible, disarticulation and one-stage replacement of the defect with a «Carbopol» endoprosthesis. The period of postoperative follow-up was 6.5 years, during which there were no signs of relapse. 2 years after the operation, complete coverage of the endoprosthesis with bone regenerate was determined, the configuration of which corresponded to the healthy branch of the mandible. The remodeling of the condylar and coronoid processes by this regenerate was noted, as well as the formation of the tooth germ 3.8 above the endoprosthesis.

According to the literature data, intraosseous myxoma occurs in 1% of cases of tumors and tumor-like formations of the facial bones; the earliest age at which a jawbone myxoma was diagnosed was 13 months (Brewis C et al, 2000). The treatment, according to different authors, is surgical — resection of the jaw within healthy tissues (often with preservation of continuity). However, a method of curettage treatment has been described. Replacement of postoperative defects, according to the literature data, is carried out with bone autografts, soft tissue-bone flaps on the vascular anastomosis and reconstructive plates.

The purpose of this article is to raise awareness about myxomas of the maxillofacial region in children and present a unique clinical case of complete reparation of the mandible after our complex treatment.

Our tasks included: 1. To make a plan of treatment and complex rehabilitation of a young child after a major surgery intervention, to evaluate the use of the “Carbopol” endoprosthesis for one-step bone tissue defect replacement. 2. To predict the success of rehabilitation and to come to conclusions after a long follow-up period.

In 2014 the patient’s mother came to the department of Pediatric Maxillofacial Surgery as she had noticed her 14 month old daughter’s left cheek swelling. The change of the face configuration due to the lower jaw bulging in the left branch, corner and body areas was noted after the examination. The skin around the neoplasm had an expressed vascular pattern. Palpation of this area was painless, regional lymph nodes were not enlarged. (Fig. 1.)

On the orthopantomogram and MSCT of the maxillofacial region with 3D modeling, revealed the lower jaw neoplasm, which was spreaded from the left lower jaw condylar process to the tooth 7.5 area. The cortical bone was swollen and partially destroyed. The changed areas had reduced density with uneven contours and a homogeneous structure. (Fig. 2). 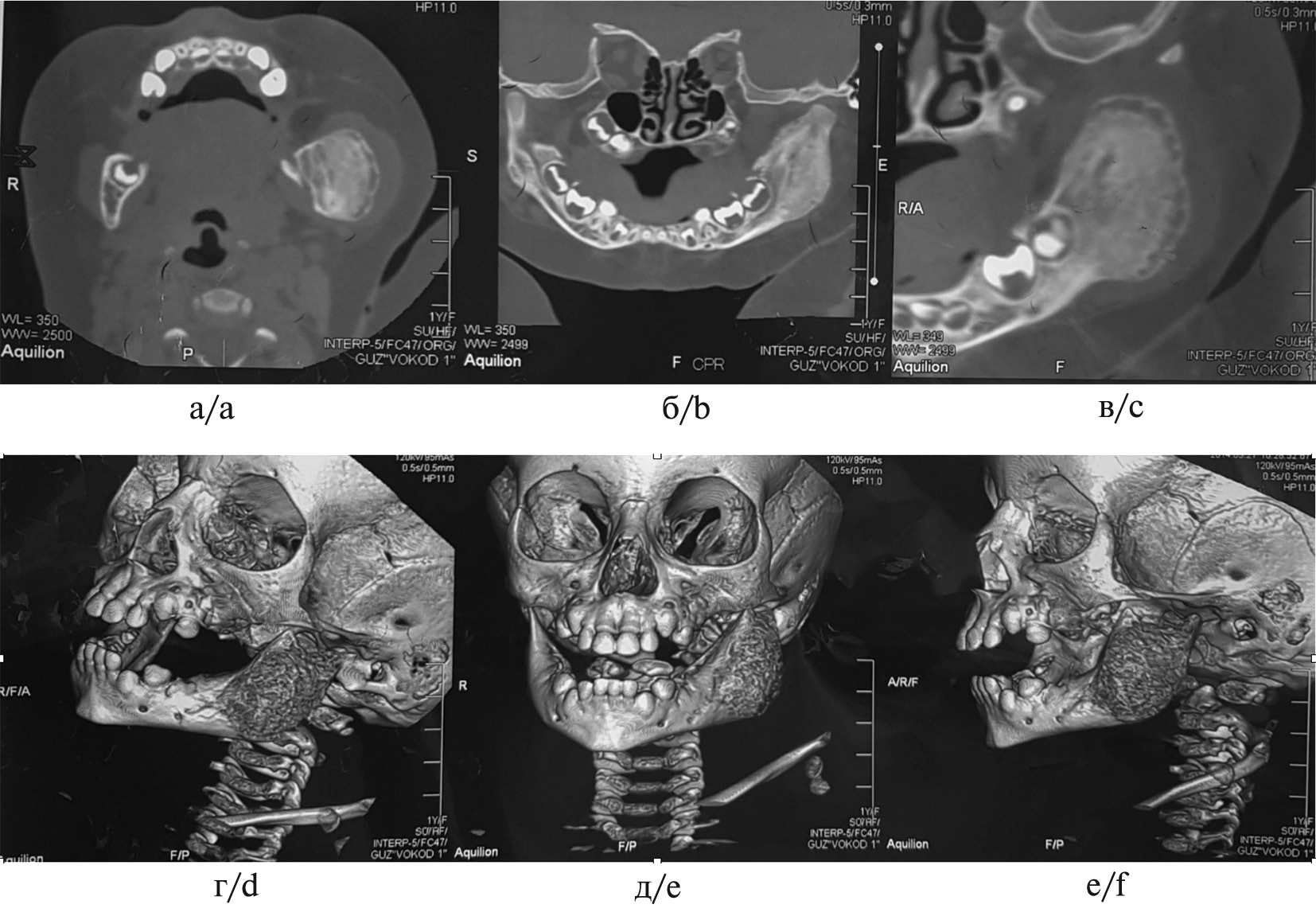 We made a stereolithographic model (Fig. 3), based on which a virtual operation was carried out. The individual endoprosthesis based on methylmethacrylate with hydroxyapatite, reinforced with “Carbopol” hydrocarbon threads according to the size of the defect was made with the help of the stereolithographic model. The neoplasm was removed using the lower jaw half resection method from the area of the tooth 7.5 with disarticulation and it was performed simultaneously the defect replacement with an individual endoprosthesis. Intraoperatively was revealed a preserved periosteum; the surrounding tissues were not involved in the pathological process. The endoprosthesis was fixed with titanium plates and screws and was covered with a periosteum, the wound was sutured. According to the results of a histopathological study: in received tissues revealed stellate and spindle-shaped cells in an abundant mucoid stroma without fibrous tissue, with individual cellular elements represented by lymphocytes and erythrocytes. Conclusion: myxoma. 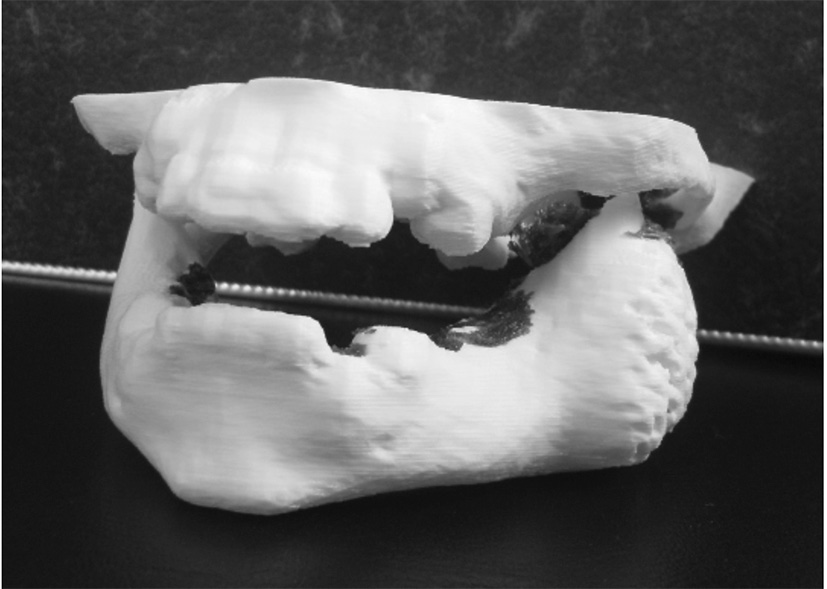 Fig. 3. Stereolithographic model, made according to the provided MSCT for endoprosthesis modeling. 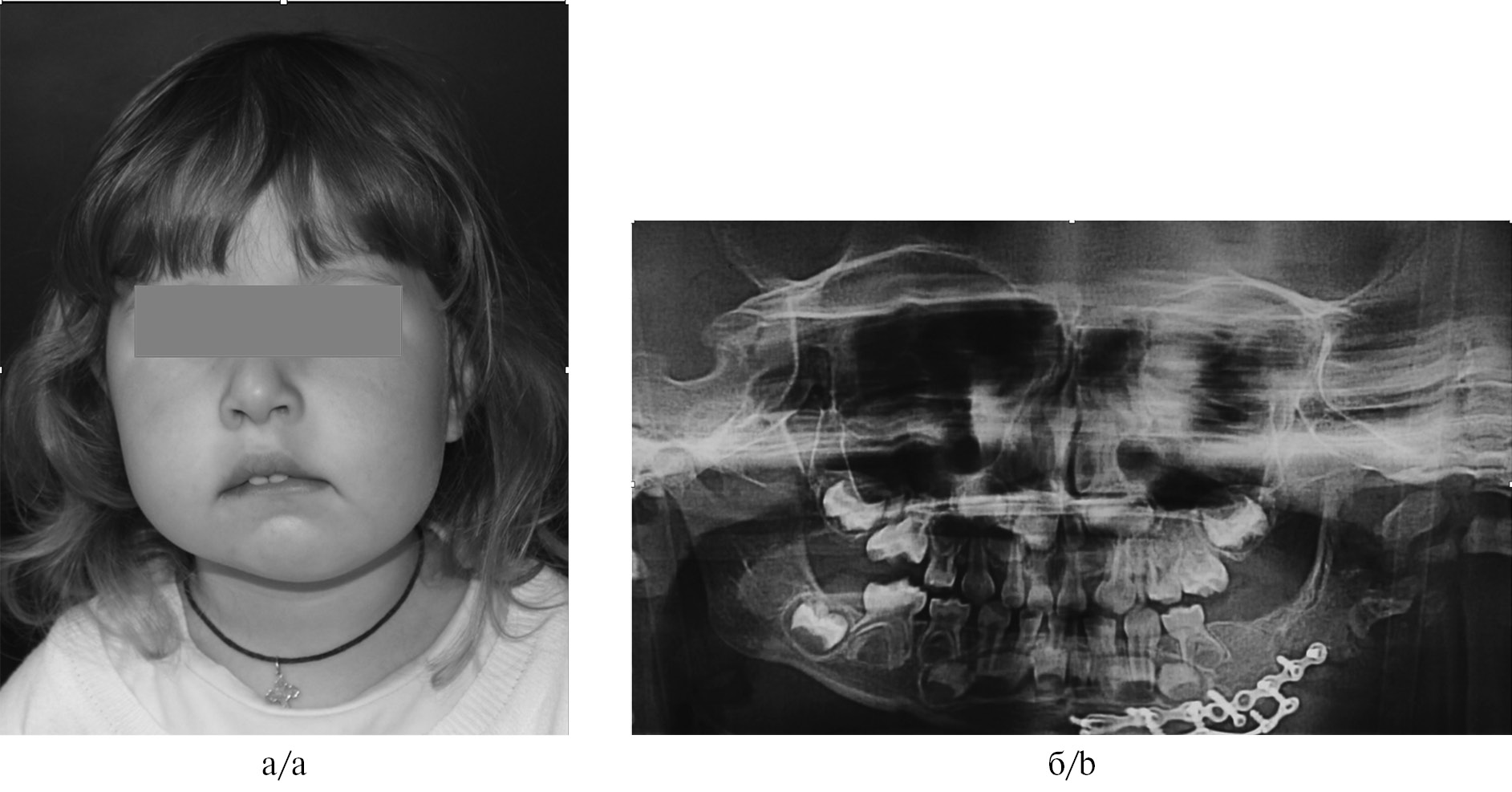 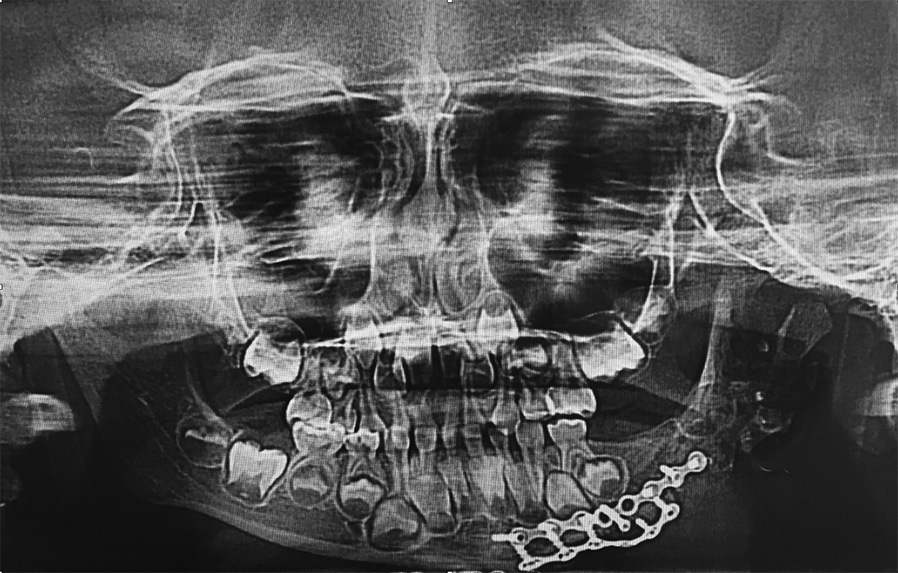 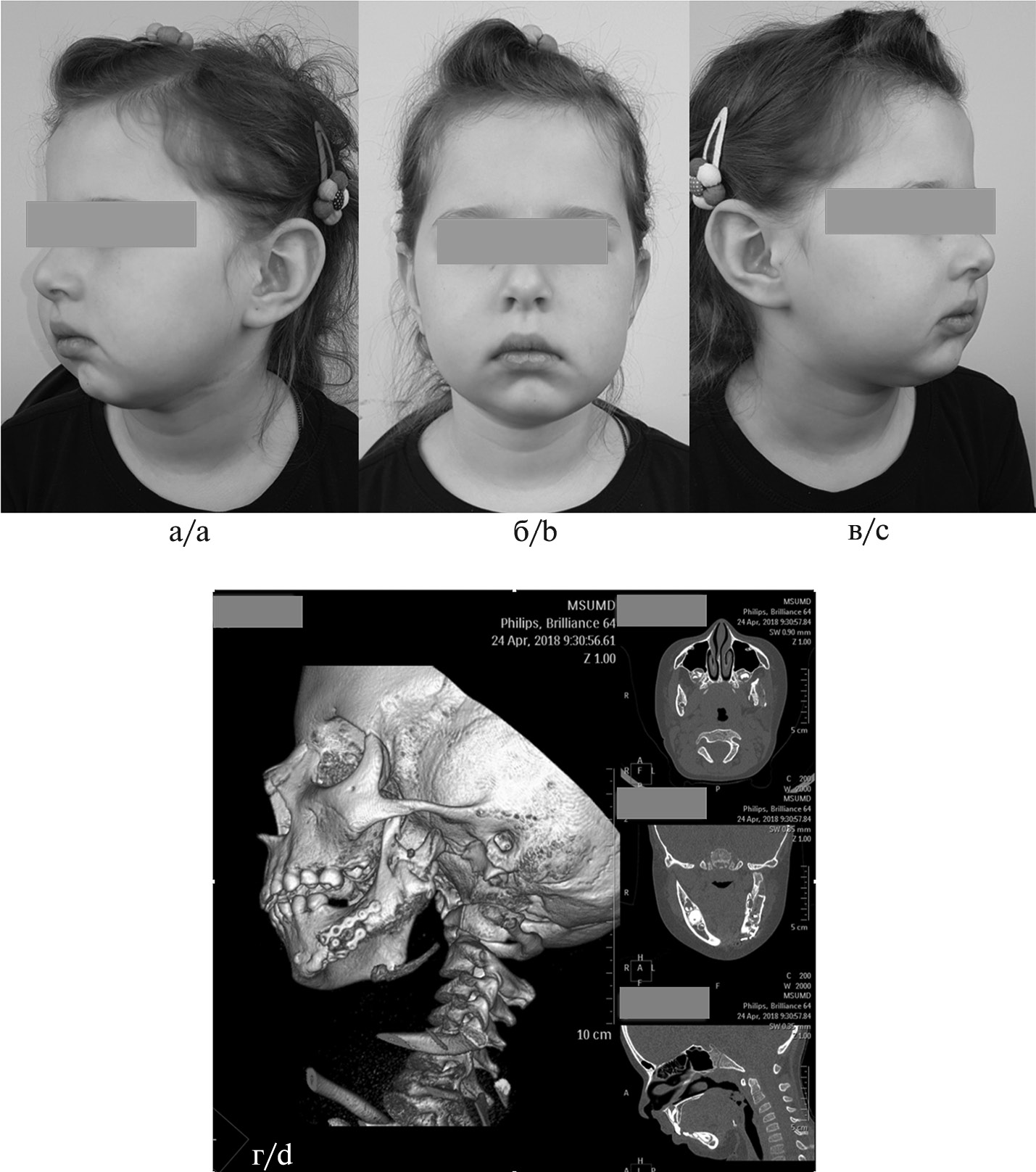 In 2019, X-ray control on MSCT revealed complete remodeling of the left condylar and coronoid processes of the lower jaw around the endoprosthesis, the continuity of the bone tissue along the entire length of the branch, angle and distal part of the lower jaw body on the left was maintained. The tooth 3.8 germ was also visualized, it was located in the regenerate, over the endoprosthesis. However, the size of the lower jaw on the affected side was smaller compared to the healthy side, which grew with the child’s other bones. The endoprosthesis was retained from the moment of fixation at the age of 14 months to 6 years.

At the age of 6 the removal of the endoprosthesis with horizontal osteotomy of the regenerate at the branch level and simultaneous fixation of the compressional-distraction apparatus was performed. The tooth 3.8 germ was removed. Distraction started on the 7th day after surgery, the amount of distraction was 20 mm. (Fig. 7). 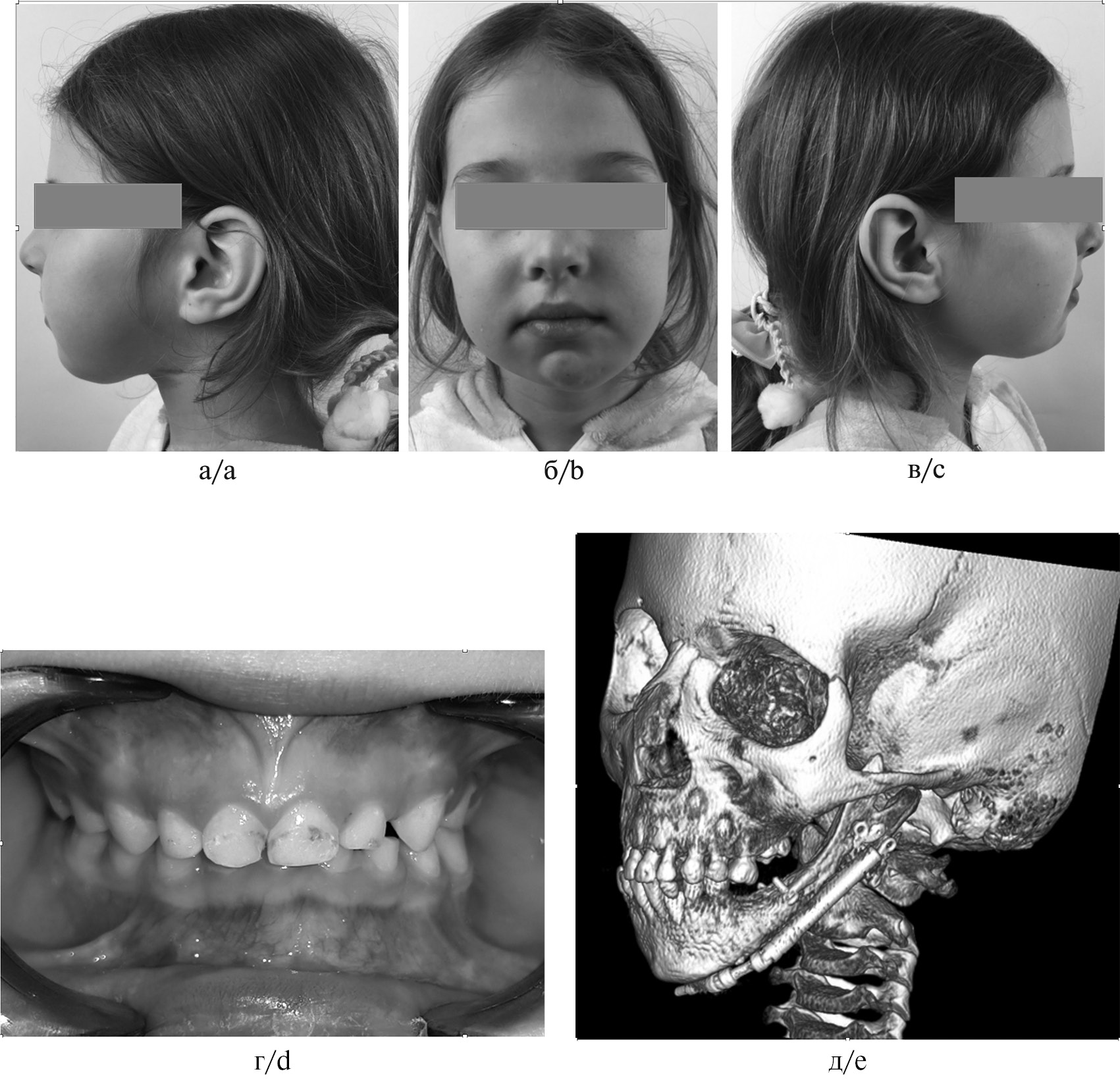 Fig. 7. 6 months after the endoprosthesis removal and compression-distraction osteogenesis of the the lower jaw regenerate (2019), age — 6 years.

After 6 months the compression-distraction apparatus was removed. The postoperative period was uneventful.

In 2020, 6.5 years after the neoplasm removal with the simultaneous bone defect replacement with the “Carbopol” endoprosthesis, the patient came for scheduled examination. Based on the clinical and radiological survey, it is possible to judge the persistent absence of myxoma recurrence, the effectiveness of the chosen treatment plan and rehabilitation and high regenerative tissue capacity in pediatric patients. On the examination the face was symmetric, the cosmetic center was not displaced. (Fig. 8a, b) The mouth opening was full. There was a slight deviation to the left, when the mouth was opened. The color of the oral cavity mucous membrane was not changed, not thinned. The bite was physiological, the dentition deformation was not noted, the occlusal line is parallel to the pupillary line, the face cosmetic centers of the lower dentition and the upper dentition matched (Fig. 8c). 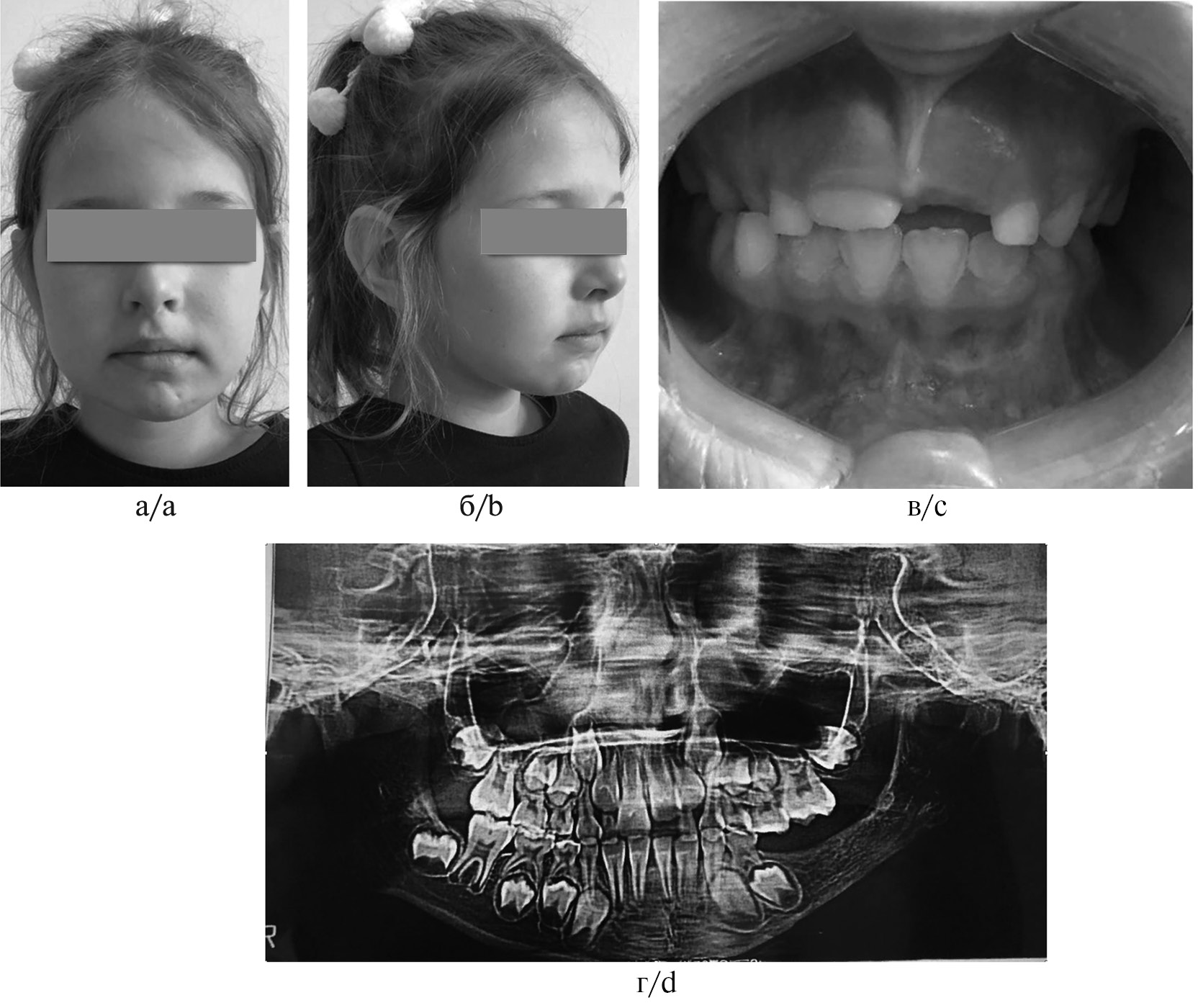 a, b — the patient’s appearance; c — bite; d — orthopantomogram.

On the orthopantomogram the left lower jaw half was represented by a rich bone tissue, which was not differing from the surrounding bone tissues, the cortical bone was not changed throughout. The left condylar and coronary processes were hypoplastic, the left mandibular branch length was slightly shortened compared to the opposite side. There were no signs of tumor recurrence. (Fig. 8d).

1. To sum it up we can prove that the “Carbopol” endoprosthesis based on methyl methacrylate and hydroxyapatite reinforced with hydrocarbon threads has a good biocompatibility in early age children. 2. Intraosseous myxoma is a rare pathology for children, therefore, it is not possible to foresee the treatment prognosis. The choice of treatment tactics was based on the affected tissues volume. However, the presented clinical case demonstrates not only a favorable outcome, but also the complete organ restoration after the total removal. Moreover, we see the restoration of the function of chewing food, which was lost by the child as a result of the disease, and a good functional and aesthetic result.

The choice of the neoplasm removal by the lower jaw half-resection method with the simultaneous defect replacement with a temporary endoprosthesis at the patients aged 13 months made it possible to prevent the secondary facial bones deformities and preserved the bone of donor zones. The preservation of the periosteum promoted the bone tissue regeneration in the lower jaw body, left branch, left condylar and coronoid processes with the organ-specific, anatomical and physiological regenerate structure features.

The authors declare no conflict of interests.